5 Over-the-Top Orlando Developments Coming Soon | WhereTraveler
Skip to main content
From the I-Drive 360: Home of the Orlando Eye to the world's tallest roller coast, Orlando's tourism scene reaches new heights.
The Orlando Eye will be the little-sister icon of the London Eye (©Unicorp)

Orlando is already the world's largest tourist destination with nearly 60-million overnight visitors—that's millions more than New York and more than the annual visitors to London and Vegas combined. But in no way is this destination ever happy with the status quo. Everyone from Disney's Imagineers and Merlin's creative team to the City of Orlando is always thinking of the next greatest attraction to keep visitors coming back for more, year after year.

This spring, visitors can hop aboard a 400-foot-tall Ferris wheel where they'll ride inside a fully enclosed, air-conditioned glass capsule for stunning views of the attractions, the downtown skyline, and on clear days, all the way to the Kennedy Space Center. Located below will be world-class venues including Merlin Entertainment's famous Madame Tussauds wax attraction and a Sea Life aquarium with 5,000 creatures and an ocean tunnel. I-Drive 360 will also be home to an array of restaurants, shops and entertainment venues. 8445 International Drive, Orlando, 407.999.9985

Disney's free outdoor dining and shopping destination, Downtown Disney, is undergoing a major transformation into Disney Springs. The destination will feature various neighborhoods reminiscent of old-fashioned, waterfront towns along with an array of new restaurants and stores that will double the current options available to visitors. Chef Masaharu Morimoto from Iron Chef America will be opening Morimoto Asia this upcoming summer, his first-ever pan-Asian restaurant with exhibition kitchens showcasing traditions like Peking duck and dim sum. Another restaurant, the BOATHOUSE, will open this spring featuring steaks, chops, seafood and a raw bar along with guided water taxi rides on a 40-foot Italian boat. The BOATHOUSE is the latest project of Schussler Creative, the creators of Rainforest Cafe and T-Rex. Downtown Disney's mainstays like Raglan Road, the LEGO store, movie theater, House of Blues and other favorites remain open throughout the renovation. 1780 E. Buena Vista Drive, Orlando, 407.939.6244 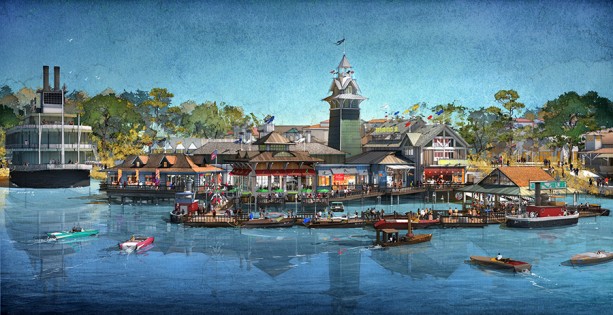 David and Joshua Wallack, the owners of the famous Mango’s Tropical Café in South Beach, have plans to bring Ocean Drive to International Drive with the entertainment complex SKYPLEX, along with the world’s tallest roller coaster The Skyscraper. The $200-million SKYPLEX will encompass 495,000 square feet filled with a variety of high-energy nightlife options, including, of course, Mango’s, set to open next year. At 570 feet tall, the Skyscraper will be a vertical thrill ride and the first Polercoaster ever built. To get there, visitors will ride in the region’s tallest glass elevator, up 55 floors to the top. For those who want a more chill option or perhaps have a change of heart, at the top of the tower will be a nightclub with stunning, 360-degree views of the area. I-Drive and Sand Lake Road, Orlando, 800-921-MANGOS

Opening in just two weeks, downtown Orlando's new performing arts center sets the stage for Broadway shows, the Orlando Ballet and the Orlando Philharmonic Orchestra. The $500-million facility will be a remarkable venue for concerts and special events. Upcoming shows include Sheryl Crow, Emmylou Harris, "Phantom of the Opera," "The "Nutcracker," "Book of Mormon," and "Jazz Roots," a tribute to Ray Charles. 455 S. Magnolia Ave., Orlando, 407.839.0119

A 19,500-seat soccer stadium has broken ground near the Amway Center in downtown Orlando and is scheduled to open in 2016. Orlando City Soccer will be joining the major leagues, becoming the city's second pro team after the NBA's Orlando Magic. Plans feature a 360-degree lower bowl, full-roof canopies covering all seats, a natural grass field, fan plaza areas and multiple VIP hospitality areas including a club lounge with 38 luxury suites. In addition to Orlando City Soccer games, the stadium will host various NCAA sporting events including soccer and lacrosse as well as concerts and festivals. West of I-4 at Church St., Orlando, 855.ORL.CITY

12 Tips for a Better Disney Trip

6 Ways to Experience Walt Disney World Without Buying a Ticket

Things to Do in Orlando for Free

Downtown Orlando in a Day